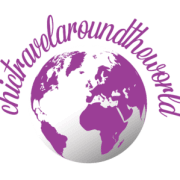 4 Reasons why you should stay at the Hyatt Regency Trinidad

I stayed at the Hyatt Regency in Port of Spain, Trinidad.  My cousin recommended staying there as she stayed there early this year.  Apparently its a hotel that has celebrities and dignitaries.  My driver told me Obama and Nicki Minaj have stayed there. 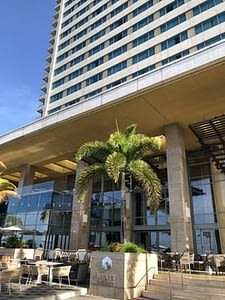 Location of the Hyatt Regency Trinidad

In the midst of Port of Spain.  Close to all the action. The hotel sits on the waterfront. It is close to the port where the ferry docks to take you to Tobago.  So many people recommended I visit Tobago but didn’t get a chance to get here on this trip.  Hopefully the next time I am in Trinidad.  There are lots of things to do close by to this hotel.  For kids, there’s the Emperor Zoo and also an entertainment area, MovieTowne.

The Queen’s Park Savannah is very close by for all those Carnival lovers who need somewhere to stay.  There are lots of restaurants in close proximity as well.  I was very delighted with my choice of staying here as we did not have a car and took either a private hotel taxi or we went with our driver that was arranged by our cousin. There are also plenty of private hotel taxi drivers who can offer you a private tour.  We took a private taxi from the hotel to Falls at Westmall.

The taxi driver was very friendly he gave us some tips on places to eat and on way back took me to get roti at Patraj. There are so many good food places close by as the hotel is in the heart of Port of Spain.  Its the best of both worlds because it’s in the city but also on the waterside.  I don’t know about you but I find it to be very soothing to sit and watch the boats pass by.  We did this most evenings from the downstairs Club Lounge area or from the upstairs infinity pool.

The hotel has one of the best pools a large infinity pool with great views of the Gulf of Paria.  The water is so soothing to enjoy and there’s plenty of lounge chairs.  Some are in the shade and some are in the open for those that want to soak in the Caribbean sun.  There’s a great restaurant that serves casual food like hamburgers, sandwiches.  We also enjoyed cocktails and Pina Coladas.

Rooms of the Hyatt Regency Trinidad

Spacious and very modern.  As soon as you walk in you will notice the rooms are huge according to North American standards coming in at 390 square feet.  Rooms can have city view or ocean view. We had a city view and at first I wanted an ocean view because who doesn’t like to sit and just watch the waves crash.  It’s my favorite past time however because I was there during New Year’s Eve I wanted to be able to see the fireworks from my window.

Well, this did not disappoint Trinidad has the longest fireworks show I have ever seen.  As private individuals can obtain fireworks by buying them from the side of the road.  The fireworks literally lasted like 45 minutes in total and we had the perfect vantage point.

The room I had a Separate toilet and shower.  Open concept shower with privacy glass surrounding it.

Staff of the Hyatt Regency Trinidad

What’s a hotel without great staff.  Staff truly determine if your stay is average or beyond average.  Well I can gladly say the staff were awesome, friendly and would go above and beyond to please the guest.  All staff we encountered were professional.  We had such a great time and would definitely go back.  The lobby is however small for such a large hotel so the lines can be long during check in especially during holidays like Christmas/New Year or Carnival.

The food at the Hyatt Regency Trinidad

I enjoyed club lounge access daily.  Upgraded for US $40 a night. Had breakfast and dinner each night there.  There was a variety of choices in the lounge overall good value for money. The best part was also they featured many of the local Trinidadian dishes that I was dying to try that I had come across in my research before visiting the Twin Island as it is affectionately known as.

I didn’t get to try any of the other restaurants during my stay but there were several offered on site.  I really wanted to try the sushi but had so much great food at the Club Lounge that I never got an opportunity to eat there.

Overall an excellent experience.  I would definitely return to this 5 star hotel.

This site uses Akismet to reduce spam. Learn how your comment data is processed.